“An organizational meeting for a school for the Mentally Retarded children of Adams County was held Monday night at the Wilson Children’s Home with Mrs. Margaret Stephenson, of Wamsleyville, explaining the importance of such an undertaking for the county. She also described the benefits to the pupils in the educational program. The name of the “Happy Hour School” was selected and their goal is to raise money to support the venture.” This is from an August 20, 1964 newspaper article.

The first class at Happy Hours School had nine children and one teacher, Inda Evans. The Child Welfare Board administered the program. To oversee the program a board was formed with Margaret Stephenson as President, Audra Jones as Secretary, Norma Hayslip as Treasurer, Wanda Combs as Reporter, Teresa Wallace, and William Woolard.

The program operated in different church basements in West Union until September, 1969, when it moved to the Oliver Township School. It was purchased from the local school district for $1.00.

In 1976 plans were developed to start an Adult Activity Center for adults in Seaman. In 1984, Norma Bowman, Superintendent at the time, applied for a grant from the state for the construction of a new sheltered workshop. The grant was approved in 1989 and the new workshop called Venture Productions, Inc. was constructed in West Union.

Through the years, as the local school districts have taken responsibility for the education of children with disabilities, the preschool and school age programs have been dropped. The last school age classroom closed at the end of the 2008-2009 school year.

In 2000, another grant was obtained by Lizabeth Lafferty to expand the physical building of Venture Productions and to allow an additional 40 individuals to gain services through the Adult Services Program.  2016 brought the program full-circle as the Happy Hours School Building was deeded back to Ohio Valley Schools so a specialized program to meet the needs of students with intense disabilities and emotional issues could be opened.  The Adams County Board of DD relocated its office, along with the Service and Support Administrators, Family Support Services, Early Intervention, Business Manager and Superintendent to the Adams County Job and Family Services Building at 482 Rice Drive, West Union, Ohio. 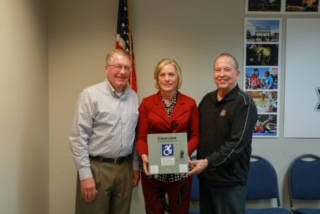